Why We Created MMX / ModernMuscleXtreme.com

Dave Weber, the founder and owner of Modern Muscle Performance / Modern Muscle Xtreme has a long history of Chrysler engine development. What began simply as two brothers sharing a love of racing in their 1971 Duster as a hobby ended up being Mr. Weber’s life-long commitment to the Mopar brand and development on many levels.

Innovations began early in the basement of Brother Joe’s house on a simple manual lathe and mill were they worked together to build one of the first 904/727 transmission conversions for there SSIA duster. David then made the decision to pursue a mechanical engineering degree to become a better racer. While pursuing his engineering degree (major in internal combustion engine technology) Dave began tutelage under the masterful eye of Bob Repine of Eldred PA, a very skilled engine builder. Hence the Bob’s Automotive Duster began.

Also while attending college Dave met future race and business partner Kent Ritter. Kent and Dave formed Ritter and Weber Racing which had a competitive record setting race program in both Super Stock and Competition eliminator in the NHRA. In pursuit of their racing goals Dave developed many first for the small block engine platform. Things like cam belt drives, 48 degree blocks, and cylinder head development with the expertise of Jim Bell of Texas that led to the W8 head design and this all came from a small shop In Wellsville New York.

In 1994 Dave and Kent split and Weber Machine was born. Although still building race engines he was no longer racing. Well this was short lived and with the introduction of the NHRA Pro Stock truck series He received calls for Dick Maskin, Alan Patterson, David Nickens all wanting him to assist in ramping up the Chrysler small block engine program. Dave’s was assigned to take care of the cam drive and all the front drive components including dry sump, water pump, vacuum pump and motor plates. Well this fueled the racing bug once again and lead Dave to a life changing decision for him and his family. Through all his years of small block development Dave became associated with Joey Arrington. Dave and Kent’s small shop in New York became instrumental in providing parts and development over the years for various engine programs like the Archer Brothers Trans Am program, Keselowski ARCA Racing and eventually the Craftsman Truck program. The decision was made to move south and join forces with Mr. Arrington in the NASCAR arena. 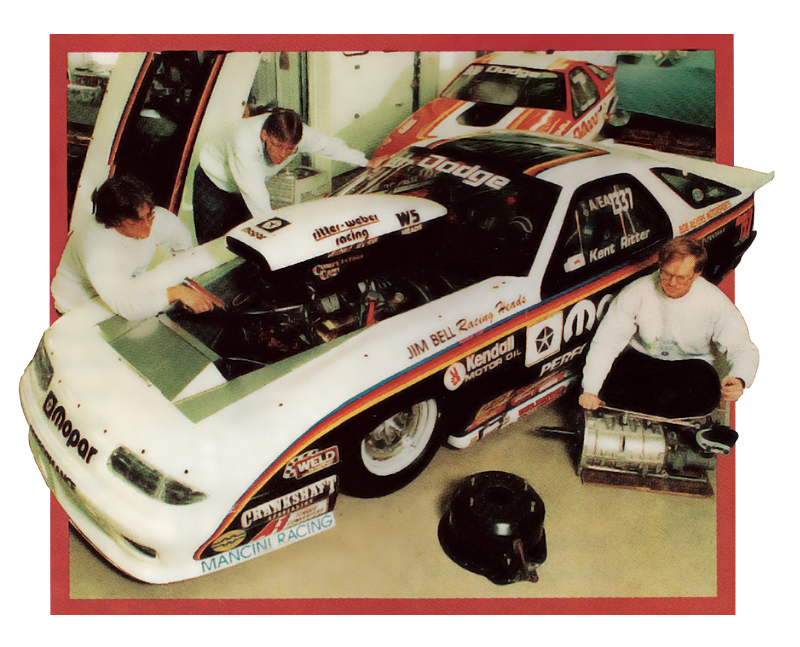 In the first year and in the very first race the two trucks they built engines for were on pole and outside pole. The year was a whirlwind and working 7 days a week with only taking Christmas day off we went from 2 to a 6 truck engine program. Year 2 the decision was made to bring all head development in house and purchase a 5axis CNC. Under extreme pressure of opening race deadline Dave would work around the clock to get the program off the ground. This commitment was apparent to all when there was a cot put in with the CNC machine and the computer room where he slept. After that things moved fast, and with Dodges decision to go Winston cup racing, it fueled the growth of Arrington Engines. A new facility designed by Dave was built in the Henry County VA industrial park. Two more 5 axis CNC machines and numerous other machining equipment were added such as the chassis dyno, multiple engine dynos, Spintron Valvetrain testing equipment and much more. Dave was called upon to head this up as General Manager and head of RD. When asked how he kept it all on track he would say it was easy because it was such a collection of talented people who took such pride in every thing they did, failure was not in there vocabulary.

Well, all good things must come to an end and with the decline of the truck program, Arrington Racing was sold to an investment group in 2006. By this time Dave interest was sparked by a new platform, the Gen 3 Hemi. With the introduction of new management and broken promises, everyone who built the reputation including Dave was left with the owner response “make the best deal you can with the new owners”. Struggling with this personally, Dave did not feel like he could do the job justice so he gave his notice and said he would stay on until the end of the year to help with the transition. Upon hearing this news, the CEO Mr. Arrington asked Dave to turn in his keys in the front office and not enter the building.

Thank goodness because now began what we know as Modern Muscle Performance and the New Modern Muscle Extreme. Dave has never lost his passion and commitment to what he does and now a whole new generation will benefit from it. Although at an age when most are looking for a winter home in Florida, Dave is busy in continuing to be innovative and investing back into the company.

Which bring us to Dave’s current obsession… The Gen III HEMI Power Plant.