Due to higher than average volume and current responses by some manufacturers to the COVID-19 pandemic, shipping and response time may be slightly longer than normal. We apologize for the inconvenience and thank you for your understanding and support. 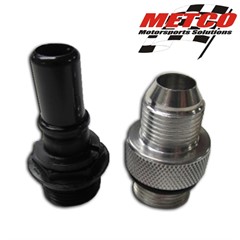 SKU:MET-MBR0020-10AN
Dimensions:12x4x1
Weight:3.0 lbs
Price: $39.99
39.99000.0000
E-mail this product to a friend
Various Mopar Applications, Including Gen III Hemi with Threaded PCV Valve (Including Hellcat)
An Original Metco Motorsports Product!
This adapter (shown on left in image above) replaces the original PCV valve on the passenger side of the engine.  It is CNC-machined from billet aluminum for precise fit, and the included silicone O-ring is specially designed to prevent oil seepage at the base of the adapter.  The body of the adapter incorporates a tall knurl to make installation into the valve cover a simple process that requires no tools.
The top of the adapter is machined to accept a #10AN hose end to facillitate the installation of a custom crank case evacuation system, PCV or catch can system, or for use with a vacuum pump.
Total adapter length is about 2".  10AN hose end (shown in images above) not included.
This adapter is often used in conjunction with our MBR0019-10AN adapter, which has the same 10AN male fitting at the top and replaces the oil fill cap on the opposite side of the engine.
**Note 1:  This adapter will fit all late model Mopar applications using the same imperial female thread in the valve cover to accept OEM PCV valve number 05038793AA.**
**Note 2:  Depending upon the AN fittings used, modification to the passenger-side engine cover may be necessary.**
Related Products:
There are no related products