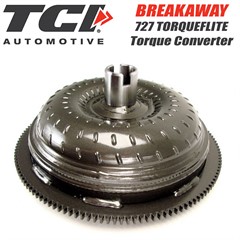 **Please check local and State laws for emissions compliance before purchasing this product**
Performance enthusiasts often underestimate the critical role torque converters play in putting their expensive horsepower to the pavement. TCI® street/street rodder and street/strip converters are designed by experienced drivetrain engineers to provide a significant increase in performance on the street or at the strip. With a more efficient stall speed, faster acceleration and better mid-range power, your machine will get the rear wheel power it deserves.
Some special features of TCI® torque converters include furnace-brazed fins for reinforcement and durability as well as heat-treated sprag races for increased strength and life span. They also utilize bearings that increase thrust capacity and reduce drag, as well as turbine spline reinforcement welds for increased durability and a heat-treated steel hub that increases converter strength. TCI® employs a highly specialized production process that involves ensuring that each unit is built to spec. Regardless of category or price level in which a TCI® torque converters falls, rest assured that it has been Triple Tested during assembly.
Once all prep work on the component parts has been completed, the impeller is welded to the front cover. Immediately following this process, a pair of dial indicators is employed on a rotating table to verify that the impeller body and pump drive hub remain true. Each unit is then pressurized and subjected to a leak test to confirm the integrity of all weld seams. Last, each unit is computer balanced to reduce annoying and potentially damaging drivetrain vibrations that can occur from an unbalanced torque converter. That’s Triple Tested so that you can be confident you’re receiving a torque converter that’s perfect for your specific application.

Torqueflite 727 Transmission
Related Products:
There are no related products